Possibility, Perseverance, and Hope at TEDx and Beyond 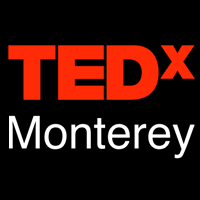 In the weeks leading up to TEDx Monterey, the universe sent a thousand mixed messages.
Perhaps it always does.
Somehow the turning of days, the tearing off of pages (or the clicking of "dimiss" on iCalendar appointments), allows these mixed messages go unheeded, unnoticed in destiny's onward march.

That is, until there is a central event into which the synergy of a given number of people, and the weight of a given number of thoughts enter at the same point on the time/space continuum. In April 2010, in this tiny single-celled organism corner of the universe, that event was TEDx Monterey.
But I may be getting ahead of myself. Let's start over (See, this is what I love about writing; you get at least three chances, what we called "re-dos" as kids.) Oh man, if I could apply the principle of re-do to my daily life, the implications would be epic.
In the weeks leading up to Monterey, my manuscript reached 300 pages, I nearly had my first fight (re-do), TEDx was featured in Monterey County Weekly in the same issue as my first-person narrative about the greening of our Seaside house, my trip and my mug were featured in a promo video for TEDx Monterey, and my car was broken into one glorious morning, leaving me without my laptop, iPod, manuscript, or TEDx slides.
Yes, that last one was a humdinger. You see, that big bad beautifully divine universe was tossing out the question marks left and right in the days prior to TEDx. Here I was gearing up to talk about hope and change, and poof! They were stolen from my gorgeous clunker of a Volkswagen, leaving behind only shattered glass.

When the big day arrived, my insides were all in a swirl, spinning like the double helix; possibility, perseverence, and hope holding hands with their dialogic counterparts: limitations, resignation, and despair. 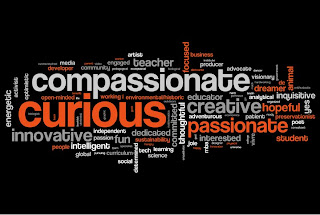 By the time Magic Seth stepped onto the stage to open TEDx Monterey with the message that all the things we imagine to be impossible are actually quite possible, I'd wrestled with possibility to the point of lost sleep. The possibility portion of TEDx frequently echoed my own dilemma with hope and change (or as the theme of TEDx Monterey called it "Be the Solution.") You see, it seems that being the solution, or believing in hope or change, can be a complicated matter indeed.

Middlebury Professor Kateri Carmola expressed her hesitation about the audacious simplicity of "being the solution" in a world faced with nuclear proliferation and countless wars. Student speaker Lakhpreet Kaur Dhariwal discussed how food co-ops can save the world, after mentioning her disenchantment at discovering that localvorism may not be a magic bullet solution to diminuating our carbon and water footprints. Peter Shaw contended that once you've lived through the most embarrassing moment of your life, you are free from self-limitations for the rest of your existence--Now that was a beautiful possibility.
When the perseverance session began, I had no idea that I was about to go on one emotional ride. Nina Rosette, VP of the Dare to Dream Fund, discussed bringing communities together to better educate young people, and provided some fairly dire educational statistics, emphasizing the need to support her organization's hopeful possibilities. KA Colorado described seeing a cow float by on an iceberg in his talk about the deep cold, and Eve Ensler had tears streaming with her talk describing the trials, tribulations, and triumphs of the world's women, Embrace your Inner Girl. Dr. Ramon Resa stood up and told his story of growing up as a neglected child field worker, overcoming the odds, becoming a doctor, and returning to serve his community. We were all moved to tears, giving a standing ovation to his triumphant story. 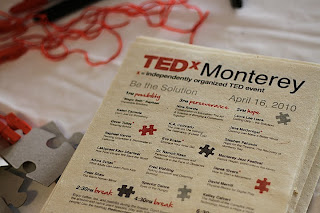 MIIS director of the James Martin Center of Nonproliferation Studies, Fred Wehling, lightened the air with a little humor while discussing how to nuke boredom in the classroom. The session closed with a stunningly beautiful dance routine, "Eyes of the Hungry." The routine, presented by Spector Dance, included film and audio clips of "Okie" migrants coming to California during the Dust Bowl followed by similar snippets of Mexican migrants traveling to our state today. The strained and painfully elegant movements of the dancer moving before the images of the migrants heightened the human drama of immigration: "In the souls of the people the grapes of wrath are filling and growing heavy, growing heavy for the vintage" (Steinbeck. ch. 25).
The last session, Hope, remains a bit of a blur to me, as a cold emotional sweat had broken out the moment I realized I was soon to take my place on the stage. Nonetheless, I got my hands dirty, mixing seeds into soil with Laura Lee Lienk who works with the Return of the Natives project. Stephen Palumbi taught the audience volumes on Pacific Grove's history--and how this tiny corner of the universe is a model of hope. The Monterey Jazz Festival brought along young musician Patrick Hogan, a 13-year-old who plays jazz with amazing spirit.
Then, David Merrill was up on stage, and I was on deck, listening to him discuss "toy blocks" of the future. Siftables are "a tabletop game console made of smart tiles that combines the social and physical play patterns of classic games with the interactive potential of video games," amazing objects with astounding implications for the future of education.
They say a picture's worth a thousand words. Here I am seconds before taking the stage at TEDx Monterey to talk about my biodiesel trip around the US: 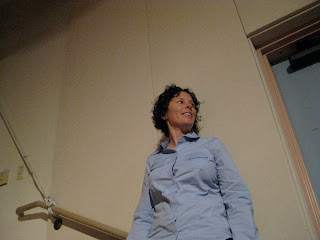 Up on stage, I entered a dark tunnel with an interrogation light shining directly into my eyes; I couldn't see a single face in the audience! I could, however, see the light gleaming from windows where 24 amazing MIIS interpreters translated our livestreamed talks into 8 languages. 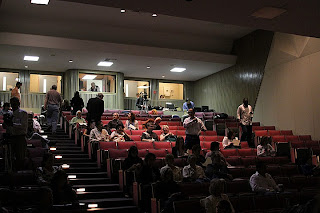 I had made modern storytelling via the internet the controlling theme of my story, but the events prior to TEDx and the event itself led me into this thought: hope is a conundrum. How are we to have hope when humanity is capable of such inhumanity? Even the basic foundation of my fossil fuel free trip, biodiesel, contains a host of confounding variables, including food shortages and rainforest depletion. Talking about my project Hope Walks into a Bar Looking for Change, I concluded that hope is a verb, something you must do to have, but the question marks hounded me.
After the presentation, I met a number of beautiful people with amazing ideas to share. Waiting in line for a small talk banquet, I was talking to a gentleman and offered the cliche "Everything happens for a reason" to one of his stories. He countered with, "Everything happens for a reason...but only if you allow for the fact that no reason might be one of those reasons."
I took that thought home with me, and incubated it in the coming days when all the unconscious thoughts made manifest by TEDx entered the headlines. The giant oil spill in the Gulf of Mexico cried out for the US to wean itself off fossil fuels, and the state of Arizona legalized racial profiling in an attempt to keep "them" out. I thought vaguely to myself, "Everything happens for no reason."
This discouraging thought is our challenge in working for change; life is a constant oscillation between hope and despair, and ultimately, "Being the Solution" means not falling into resignation. Hope the Verb, the idea that we have to do hope in our daily lives, is a simple concept. There is only one way to change things on this spiraling blue planet: We have to change ourselves, the most difficult and most fundamental challenge of all.

Posted by Kelley Calvert at 9:06 PM

Whenever people agree with me I always feel I must be wrong.
- Oscar Wilde

The 350 Project: Getting to Work on Climate Change